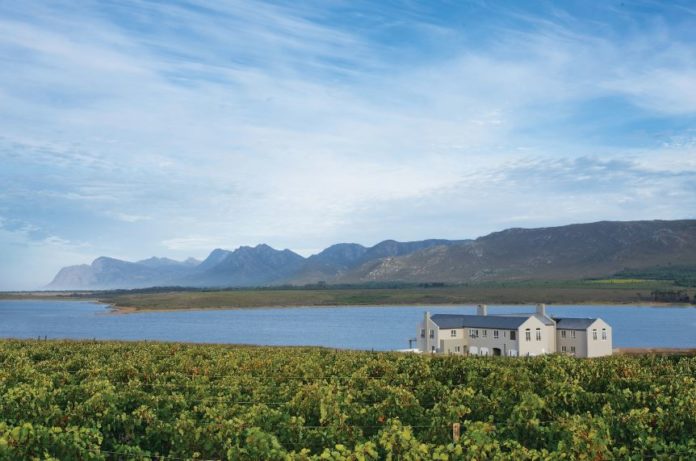 Benguela Cove Lagoon Wine Estate was awarded its first Platter’s five star rating for the Catalina Semillon 2017. This announcement was made at the annual launch of the Platter’s SA Wine Guide held at the Table Bay Hotel in the V&A Waterfront.

Platter’s has became a household name for wine lovers and connoisseurs since its inception in 1980, judging more than 8000 wines a year in South Africa. Wines rating 95 points and up are tasted blind in a second round to stand the chance of being awarded with five stars. This is also the maiden vintage for this five star hero – Benguela Cove Catalina Semillon 2017 – due to be launched April 2019. Not only is this Benguela Cove’s first five star achievement but 2017 was also the first vintage in their newly, state of the art, built cellar in the Walker Bay region, Hermanus.

Less than two decades ago, no one envisioned the shores of the Atlantic Ocean and the Bot River Lagoon to be graced with healthy vines as it is today. Exposed to adverse weather conditions, the vines planted on the Benguela Cove Lagoon Wine Estate (ranging between the age of 11 and 14 years) are not only producing exceptional fruit, but also setting a trajectory of producing wines with the quintessential elegance of a cool climate wine region. Their ethos is to only produce estate grown wine with minimal intervention in the cellar so that each wine will always carry the essence of place. The estate is also being marketed as the coolest destination with a plethora of things to do, quickly sculpting it into the wine and tourism destination of choice. In a region known for Pinot Noir and Chardonnay, Benguela Cove is making itself known for its differentiating drive, excelling with Bordeaux varietals like Cabernet Sauvignon and Semillon.

“It took a mind shift from making the best wine possible, regardless the origin of the fruit, to focusing on one region and letting the true essence of this place shine through. The goal is now to make the best wine possible from one estate, telling the story of Benguela Cove,” says cellar master Johann Fourie.”

The essence of the Catalina Semillon 2017

Opening a very old wine that is still graciously holding up its head, takes one back to the very day the grapes were harvested – by individuals holding their heads down to shade their faces from the sun. A wine like that bears witness to an era, to the perseverance of the proprietors, hard work of the harvesters and cellar workers and vision of the winemakers. One cannot help but be nostalgic about a wine that has survived this long – taking you back to a time now so far removed from our everyday existence, yet crystal clear in every sip. The owners believe the Catalina Semillon 2017, and the vintages to follow, will provoke the same heartfelt nostalgia one day.

The Catalina Semillon 2017 will join the Benguela Cove stable as its top tier wine, representative of the estate’s vision going forward, celebrating exceptional quality whilst honouring the environment, history and stories associated with its immediate landscape. The Bot River Lagoon was established as an emergency base for the landing and refuelling of Catalina flying boats during WW2 (1943 – 1945). The Allied Forces’ main supply line between Britain and Europe was via the Cape of Good Hope. In 1943 Britain sent out RAF squadron 262 with Catalina flying boats. They would use the lagoon as an emergency base and refuelling. The base was in full operation until February 1945, when both the RAF squadron 262 and SA squadron 35 were transferred to Britain.

Left behind were the intrigue, passion and love stories exchanged between soldiers and the women they met during their stay. It is believed that, despite the risk, 14 of the 16 soldiers returned to be reunited with their beloved after the war. Inspired by the history embedded at its home, The Catalina Semillon is made to conquer wine hearts with the same intrigue and mystery; its ethereal and profound character sealing our love with this special terroir.
(Previous accolades: 2018 SANW National Champion Semillon | Michelangelo Intl Wine Awards 2018 GOLD| Tim Atkin MW SA Wine Report 93 points)
Sold on allocation only

Benguela Cove Catalina 2017 will be released on the weekend of 5 and 6 April 2019. With only 1400 bottles made, Catalina 2017 will only be available on an allocation of three bottles per person. Wine cub members and home owners of the Benguela Cove Lagoon Wine Estate will be given preference to purchase their allocations. Prospective buyers can contact Benguela Cove on 087 357 0637 between 6 November 2018 and 31 March to be added to the allocation list and either the brand manager or winemaker will follow up to answer any questions. Sales open officially to the public on 6 April 2019 on a fist come first serve basis. Sharing a wine that is already forthcoming and beautiful to consume, with intrinsic qualities that ensure longevity, Benguela Cove decided to follow a timeless and nostalgic approach. Whilst the collector can decide to take one or the entire lot home, Benguela Cove will offer the service of cellaring the wines at no cost with an annual update on its progress and drinkability.

This concept is rooted in Semillon’s exceptional ability to age as well as the estate’s trajectory for producing wines with longevity due to its unique location and terroir. The wine is produced from a single vineyard, only 0.9 hectare in size. The production will always be limited. Cellar master Johann Fourie wants to take his approach to Semillon to the next level, both for educational and experimental purposes. Keeping back sufficient library stock of small experimental batches since 2008 is giving him the opportunity to monitor the work of time with the aim to showcase the grape’s profound ability to age. Johann Fourie: “Albeit a strange concept to some, being able to track the evolution over time makes it one of the most fun collections to have in your private cellar with museum wine categories still reaping accolades. And then you think, if only I kept more.” This wine will be made available in 300 lots of 3 at R1575. Bottles will be individually numbered and the original buyer of the lot will have the opportunity to buy the same lot every year. A limited amount will be individually available for exclusive tastings at the cellar. The estate restaurant Moody Lagoon will serve whichever vintage of the Catalina is at its peak drinking time at R650 a bottle.

Having taken KWV to new heights, Johann Fourie is now leading his pack at Benguela Cove with the same determination and drive. With the title of Diner’s Club Winemaker of the Year 2015 under his belt and a firm knowledge of some of the best vineyards in South Africa, he is now applying his skill to one region he believes will continue to produce characterful and World Class wines. He joined the team in 2016 as cellar master with the vision of creating wines that would benchmark the Benguela Cove brand, as well as the prospects of pursuing his love of sparkling wines produced from the owner’s properties in the UK. He believes the big efforts that went into their Walker Bay vineyards are now coming to fruition.

Infrared photography was applied to identify any differences in growth strength and the vineyards were micromanaged accordingly. Precision viticulture was applied with blocks managed separately. Sampling and separate pickings were done in sub-blocks to fine tune the possibilities. “Vines are wonderful things – they learn how to compensate and have visibly adjusted to the marginal conditions close to the sea.”

“Being involved in the entire value chain, from setting up the cellar, to planting wines in this unique and specual terroir, and producing site specific wines fulfills a dream I had for myself. Working with Penny Streeter OBE & Nick Rea, and contributing to their dynamic team, is also a great privilege.”

Owned by the entrepreneur Penny Streeter OBE, Benguela Cove is a sister property to four other establishments that complete the Benguela Collection. These include Nom Nom Eateries and wine bar in Somerset West, Lakeside Lodge and Spa in Sedgefield, Mannings Heath Golf and Wine Estate in West Sussex, UK, and the youngest acquisition also in the UK, Leonardslee Lakes and Gardens. Promoted as the coolest destination, the wines from Benguela Cove carries the spirit of the place, embodying its own personality. The estate continues to grow as a wine tourism destination, meticulously crafted to cater to different needs, whether it be a bespoke experience or an energised day packed with fun, laughter and activities.